A city-wide civic arts engagement culminating in a re-enactment of Dr. King’s funeral procession on the 50th anniversary of the event.  Stepping off from Ebenezer Baptist Church at 11:30am on the 9th of April, 2018, we invite you to join us in a March for Humanity.  We march in solidarity toward the future, in witness to the past. 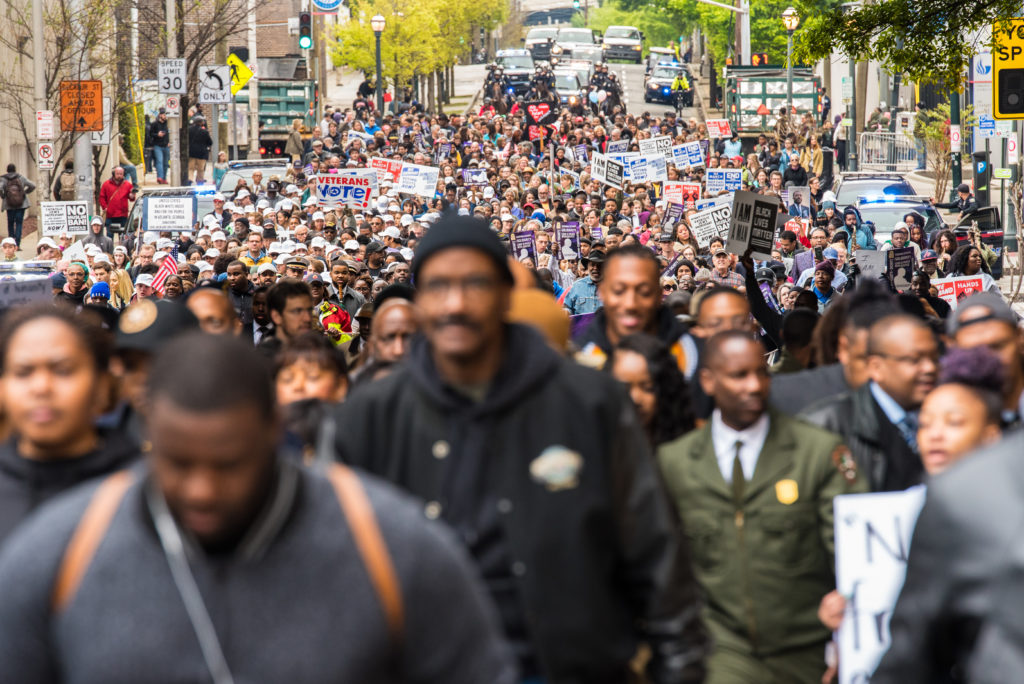 What does it mean to be “First?”  Is being first simply about getting the most for yourself, or are there other, powerful ways of leading that can enhance the collective good?  It is a short step from these very timely questions to the feet of Dr. Martin Luther King Jr.

In his sermon, The Drum Major Instinct, he offered Atlantans, and citizens of the world, an incredibly clear model of how being first and leadership can be framed to include rather than exclude, to uplift rather than to strike down.  His funeral and the public procession attended by a quarter of a million people, was an event that in many ways made manifest crucial principles of his legacy. Fifty years later, this country finds itself in need of a provocation which will re-ignite the challenges he outlined for us.

The Drum Major Project was a city-wide civic arts engagement that culminated in retracing the steps of Dr. King’s funeral procession on the 50th anniversary of the event.  Over the course of this year long project, nearly two thousand people took part in the community art and dialogue workshops that were the foundation of the Drum Major Project.  Gathering together to create wreaths, armbands and signs, participants were guided on a reflective discussion on what areas of their communities that they would like to see improved, and ways in which they personally had the power effect that change.  Each person then wrote down a personal commitment toward achieving that goal on the physical object they had created.  These same wreaths, armbands and signs would then be carried or worn in the procession on April 9th, 2018.  The design of the objects were modeled upon ones that were created by individuals and communities for Dr. King’s funeral in 1968.  Through the Drum Major Project, people gathered together to reflect, grieve, and celebrate our past and present, in the hopes of nurturing, in some small way, a Beloved Community of the future.

We were humbled and honored to have had such a tremendous engagement with the project from schools, libraries, arts centers, and spiritual groups with participants including children and elders, teachers and military personnel, librarians and pastors from all across Atlanta. The number  of the artists, activists and civic leaders contributing to this project with their talents and generosity of spirit is equally inspirational. The photographs in this catalog show moments from many of these workshops as well as from how these materials were incorporated by participants into the procession itself.   Together we honored Dr. King’s legacy while creating a beautiful and moving call to action to unite our city and foment a new vision for our community.   We hope that this may inspire others to join us as we continue to walk in solidarity toward the future, in witness to the past.


Participate in The Drum Major Project